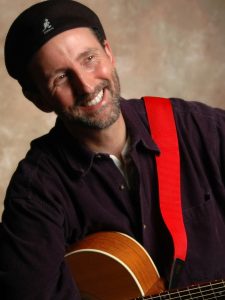 We are very excited to have award-winning musical artist Tom Kimmel join us for our Sunday Service at 10:30am on May 19.

Tom Kimmel is a soulful and unique singer and performer who has captivated audiences from Birmingham to Bhutan, from San Francisco to Stockholm, winning fans and garnering critical acclaim in the worlds of folk, rock and spiritual music.

“…not only one of the finest songwriters alive, but an incredible performer—mixing his songs, humor and story-telling to create an experience that is pure theater.”
—Pierce Pettis

Tom Kimmel is an award winning songwriter whose songs have been featured in film and television and recorded by the likes of Johnny Cash, Linda Ronstadt, Nanci Griffith, Randy Travis, Shawn Colvin, Dianne Reeves and many, many others.

“…his songs have enough personality to fill the concert hall single-handed.”
—The Herald, Glasgow Scotland

Tom Kimmel is a sought after teacher of songwriting and creative living who has led workshops around the US and in Europe. In writing retreats, classes and one-on-one coaching, Tom’s lessons make a difference in writing students’ work and in their lives.

“…best songwriting workshop I’ve ever attended, and believe me, I’ve been to them all.”
—Reggie Barrett, Denver CO

Tom Kimmel is a poet and spoken word artist whose poems are featured in poetry and literary journals, and who is a frequent guest author at book festivals and book stores in the South and around the country.

“Tom Kimmel is a treasure…. In these poems, you will recognize and celebrate your own humanity… and know it’s okay to be a human being. Yeah!”
—Marshall Chapman

Tom Kimmel is a street minister and social activist, performing and teaching from coast to coast in traditional and New Thought churches, in therapy and healing retreats, and for those in need, including hospital patients and prison inmates.

Tom is a wonderful offering to church communities and gatherings where people are ready for their hearts to be opened…. He is amazing.
—The Reverend Becca Stevens, Nashville TN

Tom Kimmel songs have been featured on albums by many artists, including:

…and in motion pictures and television shows, including: